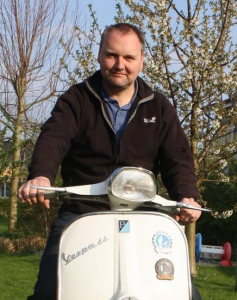 Dirk is responsible for our internset presence, Facebook, Instagram – the digital stuff! He lives with his family in the beautiful town of Lübeck and also works with Bits and Bytes.

Dirk is a „Heideheizer“ and goes to a variety of scooter runs in the year, but also a valuable member of the Vespa Club Celle. He believes the scooter scenes complement each other, and actually belong together. Both have the same Hobby – the manual geared steel scooter! Both want to spend the weekends on great tours and to party while talking shop. Dirk also considers the music side as very important – he is a self-confessed fan of soul music, the Scooterboys music! „Keep the faith“ i spart of his scootering philosophy!

In March 1988, when he was 19 years old, he got his first scooter, a PX80 (manufactured in 1982) with a 135 DR. Since then he combines his passion for scootering with friends from then and now. Many of his friends are still members of the Vespa Club Celle.

Since his first rally, the Rollershop Pary in Hegnenbach, he has been to innumerable runs and regional friendly rallies in Northern Germany. Highlights include the Noorder Nazomer rallies near Groningen in the 90s, the Eurovespas in Groningen (1998), Hamburg (2000) and Wien (2003) as well as the German Vespa Days in Herten in 2012 and 2014.

Cruising through the passes

The most spectacular rally was the Vespina 2015 in Switzerland. He will remember driving through the passes of the Swiss alps (Gotthardmassiv) for a long time to come. Many of his scooter friends were also there.

Currently he drives a PX 200 E Lusso „Der da Klecks“ and also owns a white SS180 which was manufactured in the year he was born – 1968. He is looking forward to many tours with like-minded people.

As with many members in the club, he cannot imagine a life without a Vespa. His wife, who he has known as long as he has been scootering, has also been driving her own Vespa since the start oft he 90s. Hence both have completed many tours together. It was only when the kids were small that she drove less. But now the number of tours is increasing. Their oldest daughter has been driving a GT 125 L for about a year. Their second daughter is currently trying to get her license so that she can also go to the Vespa World Days on her own Vespa. Only the youngest must still travel as sozius.

There is still a lot to do for the Vespa World Days 2017. „Muck in and do“ is his current motto, in order to be able to meet back up with and get to know a lot of Vespa scooterists! Once it is over he has earned his holiday in the familie’s caravan on the island of Fehmarn. 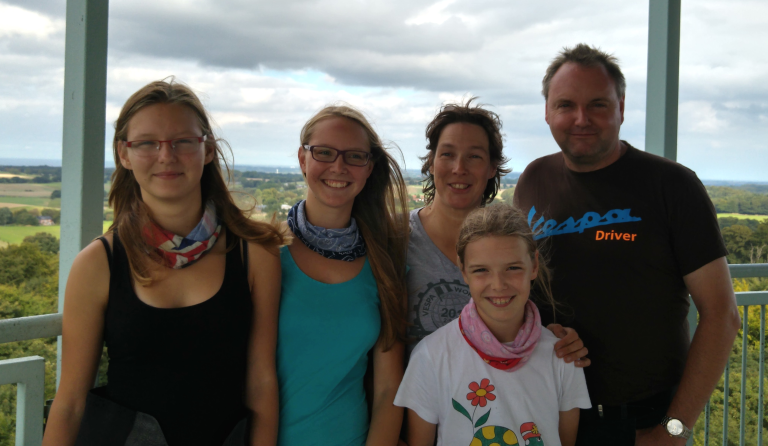